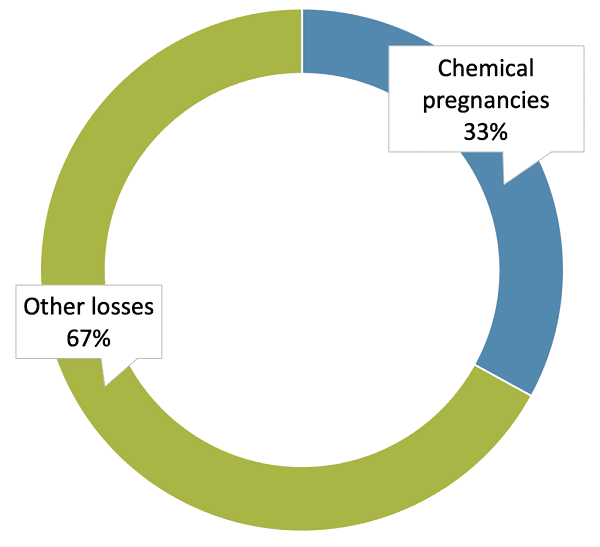 Chemical pregnancies are believed to be as much as 33% of all pregnancy losses.

How common is chemical pregnancy?

That roughly one third of pregnancies are lost before a pregnancy even becomes visible on ultrasound came as quite a surprise because no other species is known to have so many early pregnancy failures. What causes this large number of early pregnancy losses is difficult to determine because it is impossible to gain access to such early pregnancies for research purposes.

Almost everything we know about chemical pregnancies is, therefore, extrapolated data; i.e., data more or less assumed, and nothing can be presumed to be one-hundred-percent accurate. We, for example, believe that causes of chemical pregnancies mimic the causes of clinical miscarriages, which would mean that the most frequent causes are chromosomal abnormalities in embryos. The second most frequent cause is presumed to be an abnormal immune response against the pregnancy, followed by anatomical causes like uterine pathologies.

Very interesting ongoing research on early implantation was recently beautifully presented by Prof. Jan J. Brosens from University of Warwick in the U.K. at the recent FRM Conference held here in NYC, co-sponsored by CHR. He demonstrated evidence for an endometrial ability to “screen” embryos prior to implantation and allow only “good-quality” embryos to implant. Assuming this to be the case, one could further hypothesize that this screening process may reduce subsequent abnormalities, like for example chromosomal abnormalities, which then would suggest a diminished evidence of aneuploidy among chemical pregnancies in comparison to later miscarriages.

Exactly the opposite is also a possibility, however, and it will take time and probably the use of _in vitro _implantation models of human embryos (which recently have become available) to figure things out. At the present time, we really have no idea how many chemical pregnancies are chromosomally abnormal (aneuploid). We do, however, know that the risk of having a chemical pregnancy increases in women with hyperactive immune systems; i.e., autoimmunity, inflammation and/or severe allergies.