IVF success rates are one of the first factors many patients look at, when deciding which IVF center is the right center for them, but there are a few things to be careful about when comparing IVF centers this way.

Fertility centers are required to report their in vitro fertilization (IVF) success rates annually to Centers for Disease Control and Prevention (CDC) and Society for Assisted Reproductive Technologies (SART). Although the CDC and SART explicitly warn patients against using reported success rates to choose an infertility treatment center for various reasons, the data is made available to anyone interested. Here, we provide a guide to help patients interpret the published IVF pregnancy rates to make an educated decision.

The important thing to remember is that the center with the highest pregnancy rates may not be the best center for every patient, however counter-intuitive it may sound.

Caution is particularly important given the discovery (by CHR physicians, reported in a 2013 Fertility & Sterility article) that a handful of large fertility centers are manipulating their outcome reporting so that their pregnancy rates will appear higher to gain market advantage. Since then, reporting requirements have been updated to narrow the loophole discovered in the study, but the main point still stands: pregnancy and live birth rates can be manipulated in many ways, including patient selection.

What are IVF Success Rates, & How Are They Calculated?

“IVF success rates” refer to either pregnancy rates, or live birth rates after in vitro fertilization. There are several ways to calculate IVF success rates, but all are essentially calculated by dividing the number of favorable results (number of live births, for example) by the number of procedures performed (number of embryo transfers, for example). Even in a single fertility center, success rates can vary depending on how the end point is determined, and on which procedure is used as a base.

The two major types of IVF success rates are the clinical pregnancy rate and the live birth rate.

However, patients are probably most interested in the live birth rate, the likelihood of having a "take-home baby" after an IVF cycle. Live birth rate tracks each pregnancy, established through in vitro fertilization, all the way to delivery (though some will inevitably end in miscarriages). These are the IVF success rates that the CDC/SART publishes every year. Unfortunately, it takes more than a year for the CDC/SART data to become available, raising the concern that the published data may be too old to be representative of a center's current performance.

When looking for an IVF center to work with, many educated infertility patients look at each IVF center's published IVF success rates. IVF pregnancy rates do have their place in the fertility center selection process. However, it is practically impossible to compare fertility centers by comparing their clinical outcomes primarily because of patient selection bias, and more recently due to manipulations of outcome reporting by some major IVF centers.

The problem of selection bias exists in other medical specialties. For example, Medicare annually publishes mortality rates for coronary bypass surgeries. Guess who has the highest mortality rates? It's the best surgical units, because these are the units that accept and treat the most difficult cases, which, unsurprisingly, results in these excellent centers having the highest mortality rates. Due to the bias in patient selection, paradoxically, the best surgical units end up with the worst "success rates."

The same principle applies to infertility programs, and especially to IVF. The days where IVF laboratories had their "little secrets" are long gone. Today, in vitro fertilization has in many ways become a commodity in that almost every halfway decent IVF program will have good pregnancy outcomes in average patients, as long as they control the age of their patients and make sure that they only select patients with reasonable ovarian reserve.

U.S. IVF programs have been excellent in selecting such favorable patients, and over 30 years, year after year, have improved national pregnancy rates, as reported to CDC and SART. The figure below shows the rising trend of IVF success rates, nationwide, with the exception of women over 42, where the rate has fallen slightly. (Unfortunately, U.S. IVF live birth rates reached their peak in 2010 and have been declining since then.) 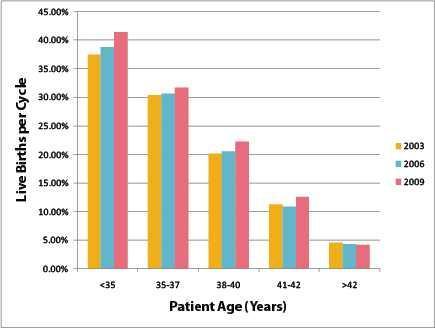 At the same time, patients who are more "difficult" to manage are getting the shaft: If their FSH is a little high or their AMH low, they are turned away from IVF. If they do not produce at least 4-5 follicles, their cycles are cancelled. If they’re above age 42-43, forget it! Some fertility centers, unfortunately, exclude these patients—at least partially—in order to maintain their high success rates.

In Europe, where pregnancy rates after IVF are much lower than in the U.S, things are even more discriminatory. Since governments in many countries control health care, including coverage for in vitro fertilization, they also determine coverage limits. In some Scandinavian countries, you are simply not eligible for IVF after 40 (depending on the country).

We bring this up here because the patient population defines results. Just as more severe cases of coronary heart disease, even in the best surgical hands, will have higher mortality rates than milder cases, IVF outcomes vary in favorable and less favorable patient populations.

CDC and SART probably have made this point best when noting that their annual reports should not be used "to compare IVF programs." Inferior programs can easily produce pretty good pregnancy rates if they carefully select their patients. Even superior programs with advanced techniques, in contrast, may have lower success rates, if those programs treat patients who have a long history of fertility treatment and highly complex cases of infertility.

Publication of CHR's 2013 finding that a small number of IVF centers may be manipulating their outcome reporting to skew higher by abusing some of the loopholes in the reporting rules only emphasizes the point. The study, published in the journal Fertility & Sterility, identified 13 centers that excluded a disproportionately large number of older women (who are expected to have poorer pregnancy chances) from their outcome reporting, thereby artificially inflating their reporting rates of success with IVF. These centers reported significantly higher pregnancy rates than all other infertility treatment centers during the study period of 2005-2010. Clearly, however, whether these higher pregnancy rates would apply to older women seeking IVF at these centers is less than certain.

Therefore, to select a fertility center based on reported IVF pregnancy rates can be extremely misleading. More importantly, basing the program choice solely on high success rates may delay actual treatment for some patients—especially if they fall into the "difficult cases" category. Centers with high success rates may exclude these patients from treatment (if not from reporting), cancel their cycles, or delay the IVF cycle start "until FSH levels, hopefully, improve" (which should not be expected to happen, since FSH usually only goes up).

How to Interpret IVF Success Rates

When you are trying to select an IVF center for your treatment, there are a few things to keep in mind.

The correct question to ask in selecting a fertility treatment center is not simply "What are the center's pregnancy rates?" but "Who are the patients the center treats, and what are their pregnancy rates?" IVF success rates do matter, but only within an appropriate context that takes into account who is treated, who is refused treatment, and whose (likely negative) outcomes are not reported. This approach also reassures that you will fit the program's criteria as a patient.

While we at CHR fully support CDC and SART in rejecting IVF pregnancy rate outcomes as criteria to compare centers, there is one IVF outcome data point that is much less subject to patient selection bias: the pregnancy rates in egg donor cycles.

Egg donor cycles are much less affected by IVF centers' patient selection, because most egg donors are comparable to each other across centers, unlike infertility patients. All centers with an egg donor program recruit donors who are young and have normal ovarian reserve. If all centers are treating a mostly uniform population (egg donors in this case), their outcomes should be a relatively good measure of their skills in IVF.

If a fertility center with respectable donor pregnancy rates has lower pregnancy rates in their general (non-egg donor) IVF program, it probably means that the program is more welcoming toward patients with more difficult cases, like older women, younger women with severely diminished ovarian reserve, women with autoimmune infertility issues or women with other medical conditions affecting their fertility.

Office Hours
Get in touch