IVF Success Rates by Age, over 40

What IVF (in vitro fertilization) success rates can be expected for women over 40 or even 45? That’s a question the physicians at CHR answer every day, as CHR has now been serving the oldest patient population of any fertility center in the U.S. for quite a few years now--by far. 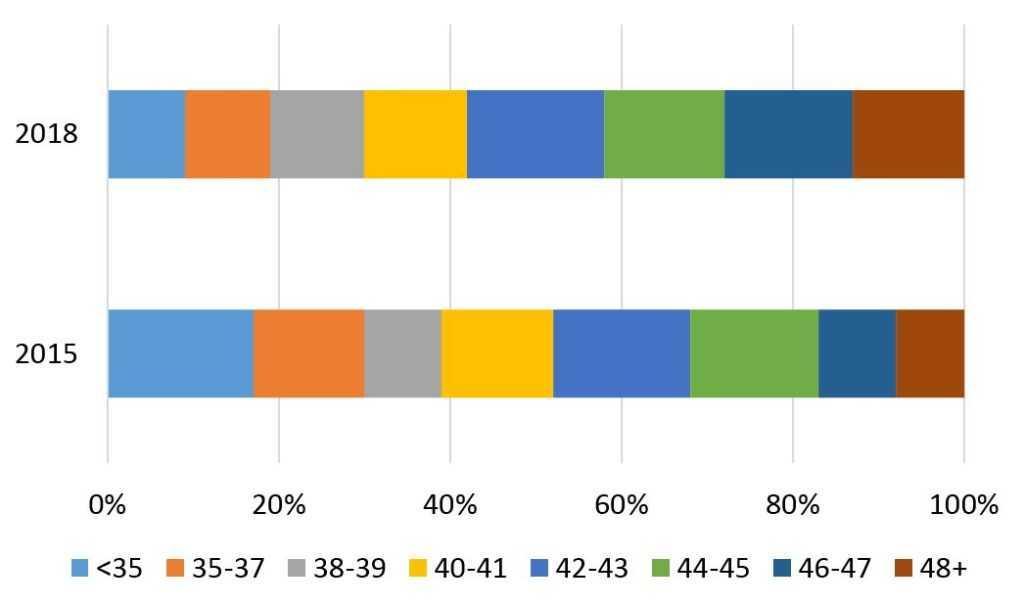 Most fertility centers reporting their IVF success rates to either the Centers for Disease Control and Prevention (CDC) and the Society for Assisted Reproductive Technology (SART) don’t even offer in vitro fertilization to women over 42-43, while we never turn patients away, nor push them into egg donation just based on their age. As the bar graph demonstrates, over 75% of CHR’s IVF patients are over 40. Nearly 60% are over 42 and nearly half are over 44.

In vitro fertilization success rates decline with age, but many women in their early and mid-40s can still conceive with their own eggs, if they are given appropriate fertility treatment. As women get into their late 40s, statistics become more grim, but not all hope is lost. Our current “record” is a patient who, at just shy of 48, conceived with her own eggs and delivered a healthy girl in 2017.

Dr. Norbert Gleicher explains how the individualized approach to the timing of egg retrieval doubled success rates among women over 43.

Over the last 10 years, CHR’s average patient age has been slowly but progressively increasing. The increase observed between 2016 and 2017 was, however, unexpected: Within that one year, the median age of CHR’s patients increased by one full year, jumping from age 42 to age 43. Since then, our patients’ median age has stayed more or less steady at around 43. This means that our team at CHR has developed a set of special expertise in helping women in their mid- to late-40s attempt pregnancies with their own eggs, such as early--and highly individualized--egg retrieval and DHEA supplementation. This expertise is reflected in our IVF success rates over 40.

IVF Success Rates by Age for Women over 40 at CHR

CHR's IVF pregnancy rates include women over 40, many of whom had severe diminished ovarian reserve (DOR) or low functional ovarian reserve (LFOR). Women over age 40 now constitute almost three fourths of our IVF patients, and we have accumulated enough clinical expertise in this patient population to achieve some remarkable success. Our oldest patient who conceived with her own eggs was nearly 48 years old.

Table 1 below summarizes CHR’s 2018 fresh IVF pregnancy rates over age 40 with patients' own eggs, stratified by age. The age group above 44 includes women up to age 52 who were able to produce transferable embryos with their own eggs.

How Success Rates of IVF over 40 Are Calculated

Because CHR’s patient population is so severely adversely selected by age as well as functional ovarian reserve, 15% of started IVF cycles did not reach embryo transfer during this study year, meaning that these patients had no chance of pregnancy. As we explain below, in patients with poor prognoses, the number of embryos available for transfer becomes a crucial predictor of pregnancy and live birth chances. This is why we are presenting the statistics only for patients who reached embryo transfer (i.e., had at least 1 embryo available for transfer). These reported outcomes, therefore, must be further reduced by 15% to see IVF cycle outcomes with cycle start as the reference point (i.e., by “intent to treat”).

Assessing IVF Success Rate over 40 for Each Patient

Above age 43, the number of available embryos for transfer becomes a very important predictor of pregnancy and live birth chances. We’ve reported in a number of medical journal articles that this oldest patient population needed at least three embryos to reach a “reasonable” pregnancy chance with IVF, which we define as a chance in the low double digits. Only a relatively small minority of women in this extreme age group meet this requirement. Therefore, the large majority who produce only 1-2 embryos for transfer greatly dilute total pregnancy rates for this age group as a whole. In other words, if you are able to produce more than three transferrable embryos after age 43 in an IVF cycle, your success rate is likely higher than the rate shown for the entire age group.

This means that women at these ages must be counseled properly with correct information: They must understand that their pregnancy chances will be in the low single digits with one embryo for transfer. With two embryos, they will be in the higher single digits; with three or more embryos, their pregnancy chances will reach double digits. Pregnancy rates in this age group, overall, will be quite low, and their live birth rates will be further reduced by an approximately 50% miscarriage rate.

“Alternative” in vitro fertilization protocols that claim to be “friendlier” to patients, such as mini IVF and natural cycle IVF, all have lower success rates than regular in vitro fertilization. This is true for most patients, but the push for these IVF alternatives is particularly harmful to women over 40 who don’t have the time to waste, trying multiple cycles of natural cycle or low-dose IVF.

Some fertility centers recommend mini (or minimal-stimulation) IVF to women over 40. The explanation is that the pregnancy statistics over 40 are comparable between mini and conventional IVF, because “older women don’t produce many eggs even with aggressive stimulation anyway.”

That is a completely unsupported claim! There is no evidence in literature that support this explanation: Even in women over 40, regular IVF, which aims to encourage the development of as many eggs as possible and safe in one cycle, has much higher pregnancy rates than mini IVF, which, by design, only produces just a handful of eggs or even fewer. Unless there are medical contraindications or economic reasons, CHR usually doesn’t recommend mini IVF to women with low ovarian reserve, which includes women over 40.

In “natural cycle” in vitro fertilization, no fertility medications are used to encourage the growth of follicles containing eggs. Similar to the situation with mini IVF, this is not as successful as regular IVF cycles that utilize proper preparation and ovarian stimulation protocols to help healthy eggs to develop in the ovaries. Natural cycle IVF success rates over 40 are much lower than regular in vitro fertilization success rates in the same group of women.