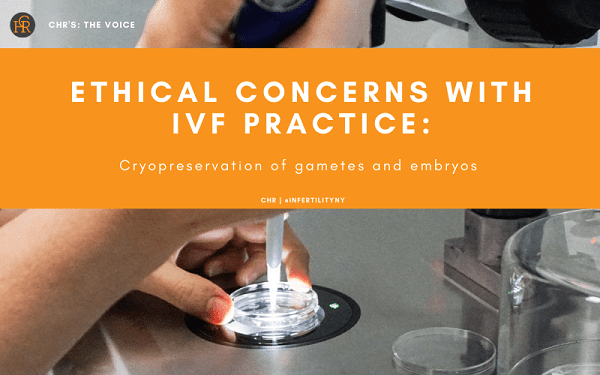 On the Cryopreservation of gametes and embryos

It is 42 years from the birth of the first IVF offspring and the world is now already approaching 10 million IVF births. There are few, if any, new medical treatments that can point toward such enormous success. But to a degree, IFV has become a victim of this success.

The ethics of IVF were very much at the forefront during the early days of the procedure. As IVF, however, surprisingly quickly went from an experimental procedure to being the mainstay of female as well as male infertility, interest in ethical issues relating to IVF waned. The subject has hardly come up in the medical literature over the last two decades, even though, considering many developments in the field, ethical concerns with the current practice of IVF should on several levels be increasing.

The ethics of IVF practice should remain a constant subject of review for several reasons; but not the least because, as the only specialty area in human medicine, IVF, daily, handles the three essential potential building blocks of human life, eggs, sperm and embryos. In practical terms this means that thousands of IVF centers in the world daily manipulate semen, retrieve thousands of oocytes (eggs) and create thousands of human embryos. Not too different from what happens in nature, only a very small minority of these so-produced embryos end up leading to pregnancy. A vast majority fail and/or are never even used in trying to achieve pregnancy.

Indeed, as this article is written, hundreds of thousands and, possibly, millions of sperm samples are frozen in the world, likely millions of eggs and at least hundreds of thousands but, likely, also millions of embryos are by now cryopreserved in IVF centers and specialized cryopreservation facilities. Among those frozen gametes and embryos, large percentages are “abandoned,” meaning that their rightful owners (in the U.S., gametes and embryos are considered “property”) not only have given up on their property but have chosen to interrupt their relationship with the IVF center they used to work with and have become “unreachable.”

For gametes and/or embryos to receive a designation of being “abandoned,” several conditions must be met: (i) The predetermined time period for a clearly outlined written instruction period to keep gametes/embryos cryopreserved has expired. (ii) Repeated attempts to reach the owners have been unsuccessful and have been documented. (iii) Owners failed to respond to repeated certified letter.

Like many IVF centers, CHR annually at the beginning of a new year reviews its frozen biological materials and finds itself in the unfortunate and unpleasant situation of having to declare a good number of cryopreserved specimens “abandoned.” Always hoping that owners may declare themselves after all, we then wait a few weeks longer before ethically discarding these specimens by letting them thaw out. Every time we are forced to do this, our hearts break because neither embryologists nor clinicians practice infertility to end up destroying valuable human biological materials that still could lead to normal pregnancies. But there is no choice because under currently still in place ethical guidelines from the ASRM (and other international professional bodies), all that can be done with “abandoned” specimens, is to dispose of them.

Not to use such specimens to help infertile couples conceive without consent from their initial owners appears ethically like a correct decision. CHR investigators and other scientists have, however, over the years repeatedly argued that similar ethical restrictions do not make sense when it comes to use of abandoned specimens for ethical research purposes. Those pleadings have, however, so-far fallen on deaf ears and, therefore, every year IVF centers discard large numbers of “abandoned’ gametes and embryos which could have served mankind to significant degrees in important research because gametes and embryos for research are always sparce.

And then there are, in addition, all over the world huge numbers of not yet abandoned gametes (especially eggs) and embryos that, with great likelihood, will never ever be used by their owners. For example, women who freeze their eggs for future use in only approximately 15% end up trying to use those eggs. Ever increasing numbers of cryopreserved embryos also will never be used by their owners in attempts to conceive because they already completed their families.

Under current ground rules at most U.S. IVF centers, patients sign freezing consents for three years. During those years, they at any time have the option of changing their instructions; They can ask to prolong the freezing period beyond 3 years; to have their specimens thawed out to achieve another pregnancy; they can donate their specimens (and sometimes even frozen ovarian tissue) anonymously through CHR to another infertile couple; they can donate their frozen specimens, whether gametes of embryos, to ethically supervised research; or they, at any moment, can request to have their specimens ethically discarded.

As a recent article in The New York Times well described, to reach a decision about what to do with no longer wanted reproductive specimens is not always easy for individual patients or couples who produced those. By default, their decision, therefore, often is not to decide and, simply, not to renew instructions every three years, knowing very well that their specimens will be designated as “abandoned.” The informed consent they signed prior to cryopreservation very clearly spells this out.

With the even increasing number of cryopreserved specimens accumulating all over the world, if appears time for the profession, but also for all of society to address this issue. While we wish to be optimistic that this will indeed happen, we, unfortunately, are not!