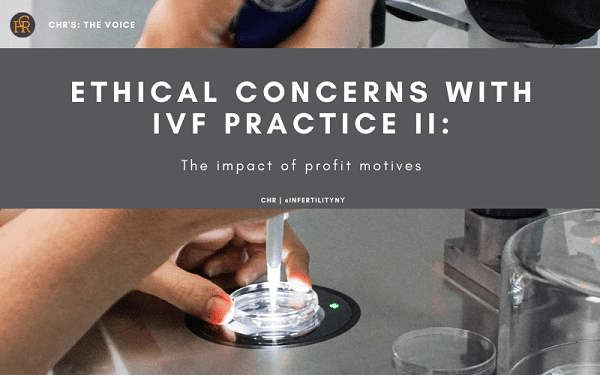 The appropriate role of profit incentives on medical practice has been, and will remain for some time to come, the central theme in every discussion of national health care, - whatever the system. One would assume that profit motives in private systems would be more dominant than in more socialist health care systems; but that is not necessarily the case because profit motives exist in any societal structure. There, indeed, is good reason most cases of health care fraud usually involve government programs.

Infertility holds a special position in the U.S. healthcare system. According to the federal government infertility is still not recognized as a disease. Thus, government health insurances plans do not offer coverage for infertility services and/or covered only in limited ways, usually excluding IVF coverage.

By passing insurance mandates which, often, define infertility as a disease, several states have filled the void. But even where private insurance covers fertility services, that coverage is, often, restricted based on underlying diagnoses, whether couples are single or married and whether they are in a heterosexual or homosexual relationship. Insurance companies which are prohibited from influencing medical care, nevertheless, do this by, for example, demanding that women undergo 4 insemination cycles before IVF, even if that medically may make absolutely no sense. Furthermore, insurance companies routinely discriminate against women by age by, for example, refusing IVF above a certain age or beyond certain FSH levels because they consider pregnancy and live birth chances to be too low. Some of the most aggressive “refuseniks” are, indeed, some Scandinavian countries, generally considered among the most “social” in the world. For example, in Sweden, women above 41-42 have no access to IVF and are forced to get their IVF cycles done in neighboring Denmark pr elsewhere in Europe.

We are listing these observations to demonstrate that the profit motive in the fertility field does not only play a crucial role, as we will further discuss below, in the physician-patient relationship, but is also strongly affecting government policies and private health insurance policies. This is also exceedingly well demonstrated, though in unusual ways, by the country of Israel, where the government covers unlimited IVF expenses for infertile women up to 3 delivered children. Though in this example the short-term motivation is not financial, but the country’s priority of growing her population, the nation may financially also come out ahead, if economic cost-benefit considerations include the lifelong earning power of an IVF-conceived offspring that, otherwise, would not be alive.

Because an overwhelming majority of health care systems discriminates against infertility in comparison to all other medical interventions, infertility services, even in countries with otherwise socialistic health care, often to a significant degree are offered by a private fee-for-service market and that, of course, has consequences. Likely nowhere are these consequences more demonstrable than in the U.S., where the IVF field has for over 40 years been, excluded from all federal funding: This means that government does not cover IVF, the primary infertility treatment for female as well as severe male infertility, while, otherwise, covering all other medical needs. In addition, the government, under Republican as well as Democratic administrations, for over 40 years has, however, also maintained an almost complete embargo on research involving human embryos, even if fully approved by ethics boards.

During its early days in the 1980s, when enormous progress took place in relatively brief time, mostly IVF researchers in the U.S. took the, then, experimental, and rarely successful procedure of IVF, first successfully pursued in Europe and Australia, and with amazing speed turned it into a widely accepted infertility treatment with steadily improving pregnancy and live birth rates that became the primary treatment of female as well as male infertility. As of this point of time, almost 10 million IVF births have been reported worldwide, citizens of the world who, otherwise, would not be on this earth. Remarkably, U.S. IVF succeeded in this effort without almost any government subsidies; to the contrary, government, often, obstructed progress through unnecessary and burdensome regulations,[1] while IVF centers self-financed all the research that was required to achieve such progress thereby, deservingly, basking in the glory of the moment.

By the turn of the century, the dynamics of IVF had, however, started to change. Once a highly dynamic and quickly advancing small specialty field in medicine, IVF stagnated, with IVF not having made any significant advances since then. During years 2000 - 2010, there were, still, slight improvements in U.S. IVF live birth rates; but by 2010 a dramatic decline started that over the next few years further accelerate, resulting in steep declines in live birth rates in the U.S. (see Figure). Similar developments were also seen in most of the rest of the world.[2,3] 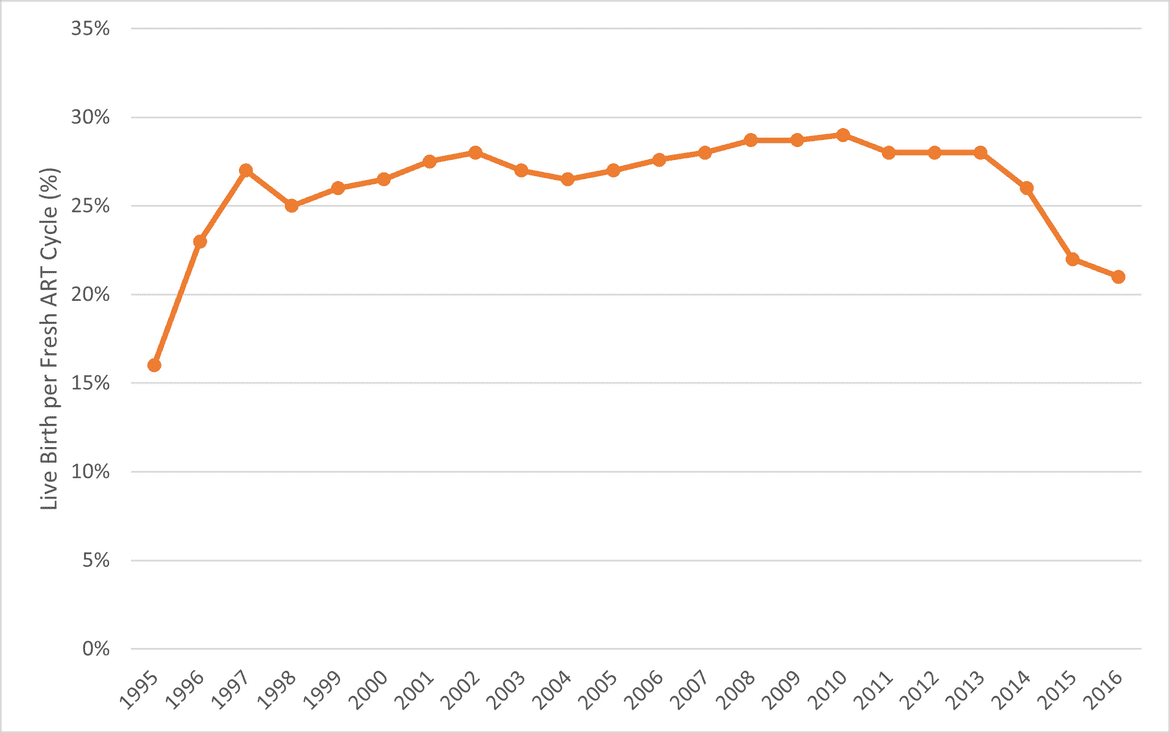 Which brings us to the main topic of our ethics review of contemporary IVF practice, - the underlying reasons for observed declines in IVF practice. CHR’s investigators have been following IVF cycle outcomes around the world for years and, already several years ago, started to voice alarm about new, and mostly unvalidated, treatments entering routine IVF since 2010.[2,3] (British colleagues gave those treatments the acronym, “add-ons”[4]). While intent for their initial introduction may have been laudable, their continuous use, even after recognition that they did not deliver promised outcome improvements for IVF (often, indeed, achieving the opposite), raises serious ethical questions. We have discussed “add-ons” in these pages repeatedly and do not want to be repetitive. Never before we, however, in these pages addressed the ethics of continued use of “add-ons,” once it was obvious that many, if not most of them, failed validation efforts and/or even affected IVF outcomes adversely.

One under such circumstances can only conclude that profit motives may have overwhelmed the purity of scientific conclusions in following scientific facts. This is further supported by the observation that the decline in IVF live birth rates in various world regions follows industrialization and commoditization of IVF in those regions and is always associated with increasing use of “add-ons.” Not wanting to assume inappropriate motivations, one is, nevertheless, left wondering how much the profit motive weighs in when those “add-ons” are used (and charged for), knowing that they will not improve IVF outcomes and be even harmful. Medical ethicists have, indeed, addressed this question and have reached the obvious conclusion that the use of “add-ons” that do not offer outcome improvements must be considered unethical[5].

One issue rarely addressed in discussions about “add-ons” to IVF in the medical literature is that, even in absence of “add-ons,” IVF is a prohibitively expensive medical procedure for many patients. “Add-ons” only further add to this burden and none more so than preimplantation genetic testing for aneuploidy (PGT-A), which between biopsy and genetic analysis in the U.S. adds approximately $5,000 to cycle costs. Remarkably, to the best of our knowledge, insurance companies do not cover PGT-A as an insurance benefit, - even if patients are fully insured for IVF since they (we must acknowledge, rightly), consider PGT-A an unvalidated and, therefore, experimental, test/procedure. Even patients with full IVF coverage, therefore, must pay these $5,000 out of pocket for a test that in over 20 years of use has failed to improve IVF outcomes. After births of healthy offspring after transfer of by PGT-A as chromosomal “abnormal” declared embryos, it is, furthermore, now also well recognized that, because of non-use and/or disposal of such false-positively diagnosed embryos, PGT-A in many patients reduces pregnancy chances.

Potential profit motives have also to be considered in play in other “add-ons” to IVF. Unfortunately, most of those have remained scientifically unvalidated in their clinical use4 and, therefore, really should not be utilized.