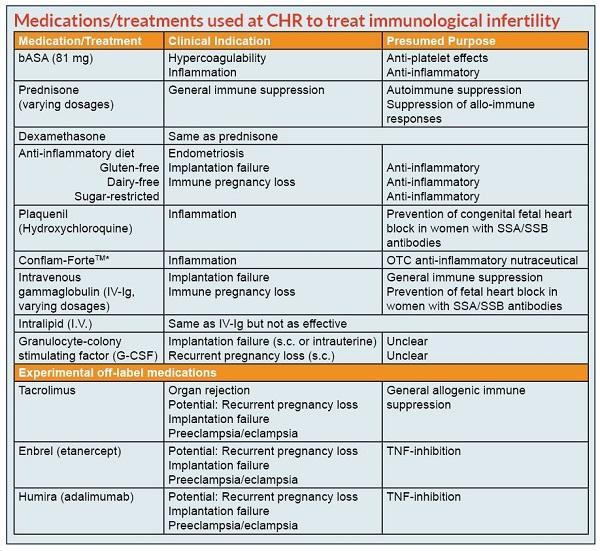 We again point out that the question here is not how to treat autoimmune problems in infertility. The reason is that we do not just treat immune system hyperactivity due to autoimmunity. There are conditions beyond autoimmunity that are associated with hyperactive immune system, and the treatment depends on the cause of the hyperactivity.

If the reason for such hyperactivity is autoimmunity, then treatment will, of course, be geared at that finding as specifically as possible, but if immune system hyperactivity is primarily caused by allergies (i.e., lab-markers eosinophilia, IgE gammopathy) or inflammation (i.e., lab-markers positive inflammatory markers, like CRP or IL-6), then treatment, of course, must be primarily directed at those problems. In those cases, treatment would include anti-histamines and anti-inflammatory medications, respectively, possibly combined with more general immune system suppression. The table summarizes how CHR approaches immunological infertility treatments based on suspected underlying pathophysiology for immune system hyperactivity and severity of findings. 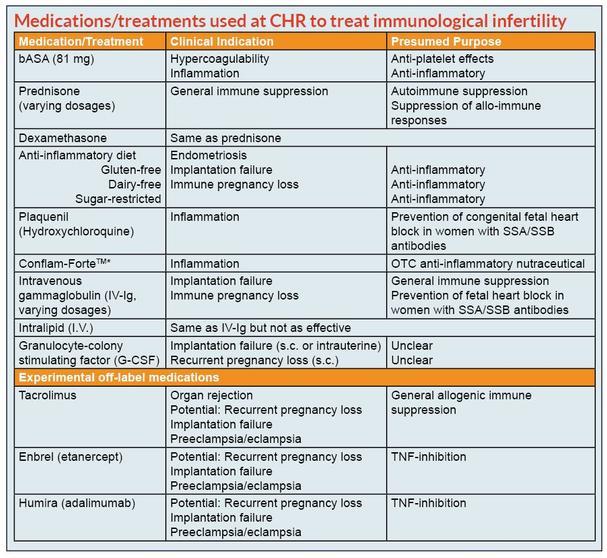 Immunological infertility treatments draw from evidence in other areas of medicine

It is important to point out that, in a classical sense, here described treatment schemes are not evidence-based; i.e., they are not based on studies performed in infertile women because such studies, in most cases, simply do not exist and, for a variety of reasons (technical as well as financial), will, likely, never be performed. The treatments are, however, based on evidence from other medical specialty areas and, therefore, are perfectly logical and with great likelihood applicable.

For example, if a woman demonstrates evidence of significant autoimmunity, assumed to impede her chance to conceive by preventing adequate tolerance development, there is good logic behind attempting to suppress this autoimmunity with treatments demonstrated to be effective in other autoimmune conditions by rheumatologists. At the same time, there is also compelling logic behind suppressing the immune system in order to reduce, or even prevent, an allogeneic immune response against the pregnancy because of insufficient tolerance levels, in similar ways to transplant surgeons attempting to suppress allogeneic immune responses by the host against transplanted organs.

This is why the recent 2018 opinion of the Practice Committee of the ASRM on immunologic treatments in IVF is incomplete and, to a degree, counterproductive. It is very easy, and entirely appropriate, to conclude that at any given point there is not sufficient evidence for a specific treatment; but such a conclusion should also be accompanied by a statement that discloses the fact that such evidence of effectiveness exists in a similar application of this treatment in another field of medicine.

These kind of considerations are more important in reproductive medicine than probably in any other specialty area of medicine because there are good reasons why prospectively randomized studies in reproductive medicine are much less common than in most other medical specialty areas: A first reason is that infertile women frequently refuse participation in lengthy randomization studies because they (in many cases correctly) feel that they do not have the time to be assigned to a placebo (prospectively randomized studies usually assign a placebo treatment to half of the patients).

A good example was the introduction of DHEA to IVF and other infertility treatments almost 15 years ago. CHR attempted prospectively randomized studies twice, once in New York City and once in collaboration with colleagues in Europe. Both attempts had to be abandoned because patients were, simply, not willing to be randomized to placebo rather than DHEA. Absence of properly powered randomized studies is by some colleagues, therefore, still considered “absence of evidence” for fertility benefits of DHEA supplementation, and some colleagues, therefore, still do not consider androgen supplementation in such women beneficial.

Though such orthodoxy is to be welcomed when it comes to costly and, certainly, potentially harmful and/or risky, treatments, it is less logical when treatments are inexpensive and have no side effects and/or risks to speak of, as with DHEA. Colleagues who, for example, enthusiastically support chromosomal testing of embryos before transfer (now called PGT-A), which is very costly and has been demonstrated to lead to the unnecessary disposal of large numbers of perfectly fine embryos with substantial pregnancy potential, at the same time may be among the most prominent opponents of DHEA supplementation, which really has hardly any downsides and is inexpensive. This philosophical and ethical inconsistency in the field of reproductive medicine is sometimes truly remarkable but there is, of course, not the same financial incentive for IVF centers in prescribing DHEA as in recommending PGT-A.

A second reason for the rarity of prospective studies in reproductive medicine is the cost of such studies and lack of funding support for reproductive research from federal government (the federal bureaucracy is by law prohibited from funding IVF-related research) as well as the Pharma industry (which generally considers infertility as too small a market to invest in). Fewer clinical trials is only one unfortunate consequence; a second unfortunate consequence is the sparsity of new drug developments in the field, which brings us back to the main subject of how to treat immunologic infertility because the Pharma industry, not only hardly develops any new drugs for the fertility field, but, not infrequently, even distances itself from off-label use of already existing and FDA-approved medications in the fertility arena.

Concerns about legal exposure to claims of potential adverse impacts on newborns are the main reason. This is an important reason why some more recently developed drugs in other medical areas that may also have beneficial benefits in reproductive medicine are difficult to apply. Instead of supporting some preliminary research on their use, Pharma companies usually refuse participation in such investigations because they cannot be linked to off-label uses of their products and are not interested in spending the money to get their medications’ indications by the FDA approved for expanded use in reproductive medicine and, especially in infertility. The table lists some of those drugs under “experimental.”