Center for Human Reproduction Blog Did you know? 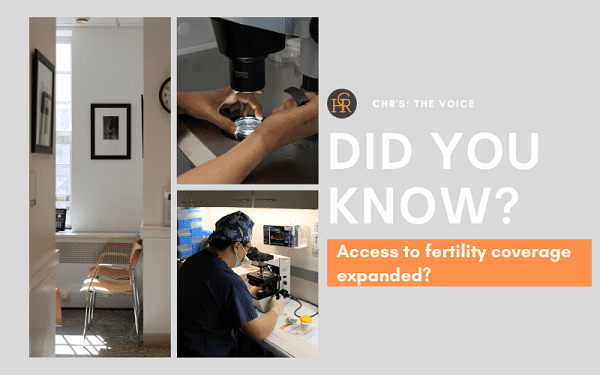 On February 11, 2021, Governor Cuomo directed the Department of Financial Service to ensure that insurers immediately begin covering fertility services for same sex couples who wish to start a family. Because many insurance plans required 6-12 months of exposure to semen during natural intercourse before insurance coverage kicked in, many same sex couples, to this point, had to pay for treatments out of pocket for 6-12 months before being recognized by their insurance carrier as “infertile” and subject to coverage. Based on this announcement, New York State will now mandate immediate coverage for same sex couples. We very much welcome this change!

The CPSA, signed into law on April 3, 2020, went into effect on February 15, 2021. It addresses the parentage of all children born through third-party reproduction with exception of genetic surrogacy (to be differentiated from regular surrogacy because in genetic surrogacy a woman not only carries a pregnancy for somebody else but also contributes her own egg to this pregnancy, which does not happen in regular gestational surrogacy). It also overturned the longstanding ban on paid gestational surrogacy in New York state and, in doing so, for the first time created a legal framework for gestational surrogacy in the state. For further questions of either subject, please call CHR at: 1-212-994-4400.

RECALL OF MENOPUR® BY FERRING PHARMACEUTICALS

Ferring Pharmaceuticals on March 3, 2021 recalled on March 3, 2021 some lots of its main gonadotropin, Menopur®. In their announcement, the company explained that the recall occurred because of a dilutant with out-of-specification pH results. Being. There was no evidence that this in anyway adversely affected women who used the product. Some of the recalled lots included samples CHR on some rare occasion receives and cost-free passes on to patients without insurance coverage and financial means to afford medication. If you still have such samples provided by CHR, please return them and we will make certain you get proper replacements. If you recently received Menopur® from a pharmacy, please contact that pharmacy because they, likely will also want to replace what you still have. For any further questions, please contact your coordinator or call our center at 1-212 994-4400.

PREGNANCY RATES HAVE PLUMMETTED DURING COVID-19

Practically every newspaper recently reported on plummeting pregnancy rates in the U.S. and in other countries because of COVID-19. The Brookings Institute, per The Wall Street Journal of March 6-7, 2021 estimated that the U.S would see ca. 300,000 fewer birth in 2021 (8.0%) than would have been expected otherwise. And those base line numbers that had been expected were already the lowest in decades, since national births in the U.S. have already been plummeting for many years.

The U.S. is not alone in this decline. The Wall Street Journal on March 5, 2021 reported decline in pregnancies pf 5.5% in Austria, 7.0% in Belgium, 13.5% in France, 7.9% in Hungry and 7.3% in Japan. These losses not only lead to immediate consequences, but because of the shrinking birth rates of most countries, long-term economic effects will be substantial. The New York Times in early 2020, before the eruption of COVID-19, reported the looming crisis of a shrinking population in China where around 2025 the country’s steady population growth was predicted to revert. Together, with a progressively aging population, these developments have led to fewer individuals in the work force supporting the older generation as we already see in Japan, South Korea, and Italy.

Democrat as well as Republican politicians in this country have recently, therefore, proposed childcare subsidies for couples with children to improve the U.S. birth rates, as the New York Times reported in February 18, 2021. Interestingly, nobody is talking about subsidizing IVF and other fertility treatments, as Israel has done very successfully in attempts to raise birth rates.

Like general birth rates, IVF cycle numbers also tend to decline in uncertain economic times, as CHR investigators several years ago demonstrated in a study of the 2008 recession. How COVID-19 has affected IVF cycles has so-far not been reported but, from what we are hearing on the street, 2020 all over the world was a rather bleak year for the IVF field.

It always makes us very happy at CHR when a long-standing clinical practice at CHR is, finally, formally accepted. Now after CHR has been prescribing to our pregnant patients at high risk for preeclampsia for probably close to 30 years, the _U.S. Preventive Services Task Force (USPSTF) _finally released draft guidance on February 23, 2021, that recommended 81mg of aspirin daily as preventive medication for preeclampsia in high-risk patients who are more than 12 weeks pregnant.

RETINOPATHY AFTER USE OF HYDROXYCHLOROQUINE (PLAQUENIL®)

After all the talk about hydroxychloroquine as potential treatment for COVID-19 patients, everybody now knows this medication. What many, however, do not know is that this medication, originally starting as an anti-malarial drug, a few decades ago by our rheumatology colleagues was discovered as a highly effective and safe anti-inflammatory drug. It ever since has been widely and routinely used as maintenance medication in patients with systemic lupus erythematosus (SLE), rheumatoid arthritis and in other autoimmune diseases.

Because the drug has also been shown to be safe in pregnancy, CHR uses Plaquenil® (its brand-named) routinely in patients with evidence of severe systemic inflammations (see also CASE REPORTS in this newsletter). The drug has only one potentially disconcerting side effect: retinal toxicity. At proper dosing of 5mg/kg or less per day the risk of drug retinopathy is extremely low (<2% over 10 years of use) but CHR, therefore, has been mandating eye exams for patients on this medication every 6 months.

A joint statement from the American College of Rheumatology, the American Academy of Ophthalmology, the American Academy of Dermatology and the Rheumatology Dermatology Society, published in Arthritis & Rheumatology, for the first time issues a joint statement noting that, “improved testing methods available to ophthalmologists now permit even earlier diagnosis.” The opinion also stresses that, “prescribing physicians and ophthalmologists share responsibility for safely prescribing hydroxychloroquine and for screening for the potential risk of retinopathy” (Rosenbaum et al., Arthritis Rheumatol 2021;doi: 10.1002/art.41683). Based on these update guidelines, CHR maintains its every 6 months screening criteria.

ASSOCIATION OF ENDOMETRIOSIS WITH SLE

As we already are talking about autoimmunity, readers of the VOICE _may recall that we last month reported on a study that reported an increased prevalence of later rheumatoid arthritis in women diagnosed with endometriosis. We then made the point that this was not news since autoimmunity had been associated with endometriosis for decades. The first to do so was, indeed, Norbert Gleicher, MD, CHR’s Medical Director and Chief Scientist, in 1987 ([Gleicher at al. Obstet Gynecol 1987;70(1): 115-122](https://journals.lww.com/greenjournal/abstract/1987/07000/is_endornetriosis_an_autoimmune_disease.28.aspx)). Now in a huge study, Chinese investigators report the same association for SLE (Fan et al. Scientific Rep 2021;11:532), further strengthening the association of endometriosis with autoimmunity and vice versa.

THE BENEFITS OF CONSECUTIVE MAMOGRAMS

Though there are always some dissenters, the value of mammography appears well established. Now comes a Swedish study that not only confirms this fact but, furthermore, demonstrated that consecutive examinations further reduced breast cancer death rates. Women who participated in the last two scheduled screening sessions before diagnosis, demonstrated largest reductions in death rates. Those who missed one of the last two sessions had significantly higher risks.

Pregnancies in older women are disruptive to mammography schedules. CHR, therefore, mandates mammograms before fertility attempts in women over age 40 who have not had a mammogram in the preceding year. This routine yields at least 1-2 cancer diagnoses annually at the center, though fortunately in most cases at very early stages.

In an article in the medical journal Pediatrics [20121;147(3):e20201137], Norwegian investigators recently reported in a large study significantly increased risks in offspring of mothers with certain chronic diseases. The highest risk was seen in mothers with type II diabetes mellites (DM) but significant risk was also recorded with autoimmune and inflammatory diseases, especially type I DM, systemic lupus erythematosus (SLE) and Crohn’s disease. What in all these maternal condition causes CP is unclear. Considering the high association with autoimmunity and inflammation, we, however, would not be surprised if it represented an immunological effect, potentially affecting the placenta (see also “Breaking News in Science” in this newsletter).