DHEA: What is Dehydroepiandrosterone?

Functions In the Body

Dehydroepiandrosterone (DHEA) is a mild male hormone that human bodies—both men and women—produce naturally. It’s a precursor hormone to many other hormones. Male hormones (androgens) like testosterone and female hormones like estrogen are synthesized from cholesterol in the body. DHEA is one of the steps involved in this process called steroidogenesis. It’s one of the most abundant hormones in the human body.

In the United States, DHEA is available as a dietary supplement without a prescription, although in most other developed countries, it is treated as a controlled substance. Many alleged benefits have been suggested and heavily marketed in many cases, including anti-aging, mood enhancement, memory improvement, muscle enhancement, cancer prevention and sexual wellbeing. However, most of these claims are scientifically unfounded, with the exception of female sexual health and, more importantly for fertility patients, female fertility, especially in fertility treatments for diminished ovarian reserve. While DHEA side effects are only mild and temporary, we do not recommend use of DHEA without physician supervision.

Watch Dr. Gleicher explain what DHEA is and how it increases your chances of pregnancy.

"Four top infertility clinics told me I'd never have a baby without using a donor egg. However … five months after starting DHEA [we discovered] I was pregnant!"

Even though androgens are “male” hormones, they are present in both sexes. Androgens are essential in the female body for the production and development of healthy eggs. In an infertility setting, particularly in conjunction with IVF, DHEA is used primarily to treat women with diminished ovarian reserve (DOR), which occurs either as a consequence of premature ovarian aging (POA) or natural female aging. When DHEA is converted in the body into testosterone, the additional testosterone restores the ovarian environment to its “youthful” state, thereby improving the quality of eggs that go through the maturation process in the restored environment.

CHR’s Role In the Introduction of Androgen Supplementation for DOR 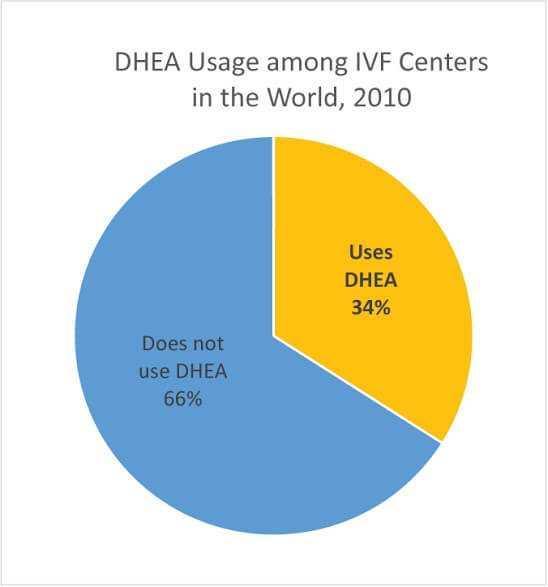 CHR’s Dr. Gleicher and Dr. Barad were instrumental in introducing DHEA use for female fertility. In 2004, CHR became the first IVF center to use DHEA as a part of comprehensive fertility treatments for women with DOR. Since then, androgen supplementation has demonstrated remarkable results worldwide. In fact, in a 2010 survey, a third of all IVF centers in the world reported prescribing it to improve pregnancy chances in women DOR in ovarian reserve testing.

Success of a fertility treatment protocol depends on how thoroughly the physician can individualize it to each patient, including proper DHEA dosage and monitoring of various indicators to see if the supplementation is achieving its desired effects. With that said, it is encouraging that this effective DOR treatment has become widely available since its introduction.

Many women with severely diminished ovarian reserve come to CHR after they were advised by other fertility centers that their only chance of having a baby would be with egg donation. After individualized treatment at CHR, a significant number of these women--about a third of them, in fact--have conceived successfully with their own eggs.

How Does DHEA Improve Fertility?

Published research by CHR has shown that women with DOR (due to advanced age or POA) tend to have abnormally low androgen levels, and that a good androgen level is essential to the development of eggs in the ovaries. DHEA supplementation helps these patients by raising the androgen levels within their ovarian environments to a normal range. Elucidating this mechanism of action has been a focus of CHR’s research in the last decade, and based on that research, CHR physicians use DHEA for IVF cycles in a well-controlled, individualized way to maximize the DHEA fertility benefits.

Need to speak with a physician?