What Does “Low AMH” Mean?

Low AMH is an important indication of diminished ovarian reserve (DOR). Blood test for this hormone is an integral part of fertility workup for this reason at any fertility center. However, many centers don't use age-specific hormone levels during ovarian reserve testing. Because a woman’s normal AMH and FSH levels change as she gets older, using a universal cut-off value to define low ovarian reserve may miss some younger women with beginning stages of premature ovarian aging (POA, premature loss of ovarian reserve). This can lead to critical delays in treatment and inappropriate ovarian stimulation protocols. 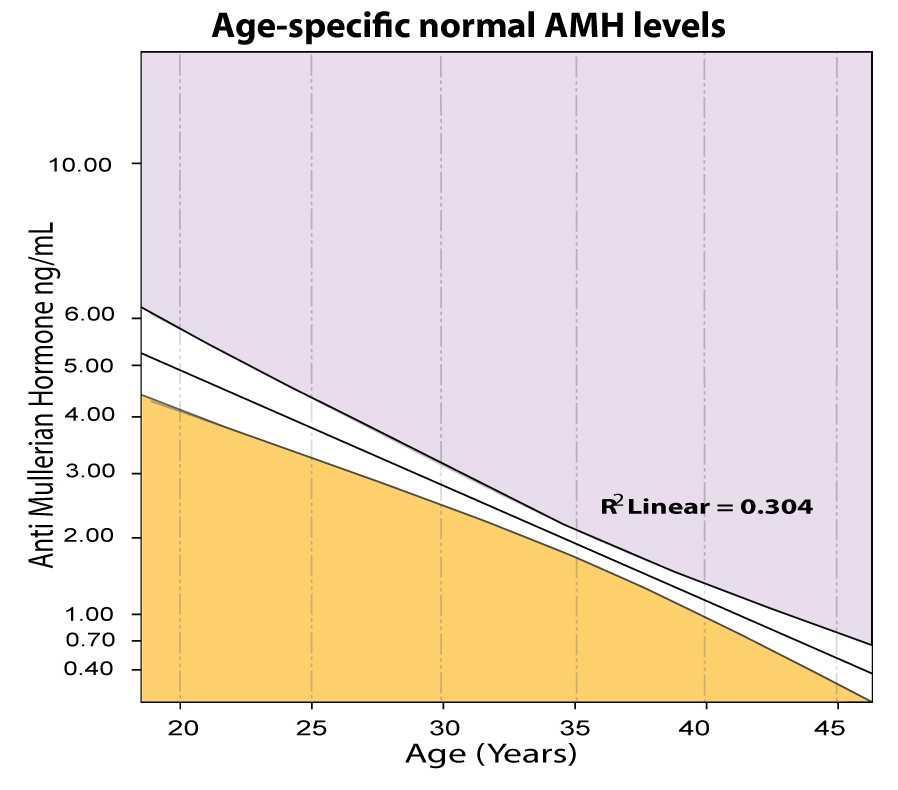 CHR has defined age-specific baselines for AMH and FSH levels to more accurately assess a woman’s ovarian reserve status. The figure illustrates the age-related decline in anti-Mullerian hormone, with the purple shaded area representing the normal ovarian reserve for each age.

This way, we are able to design IVF protocols according to each woman’s ovarian reserve status, not just based on her age. We strongly encourage women who are thus diagnosed with low anti-Mullerian hormone not to delay fertility treatment because this hormone and ovarian reserve continue to decline with age. Learn more about IVF after 40 here.

Many fertility centers still do not offer fertility treatment with the patients’ own eggs to women whose AMH falls below the universal cut-off levels (or whose FSH is above the cut-off). This approach helps centers keep their published IVF success rates high, because women with lower pregnancy chances are excluded. However, it obviously leaves women with low anti-Mullerian hormone and/or high follicle stimulating hormone levels with no opportunity for treatment with their own eggs, rightly feeling abandoned.

CHR has no arbitrary cut-off values. We work with each patient to explore the best treatment options for her clinical circumstances and preferences. In fact, when we use the appropriate ovarian stimulation protocol and address other factors involved in a low AMH patient’s infertility, we have found that the IVF pregnancy rates can be much higher than what she was told by other fertility centers. Women with even undetectable levels of AMH have been able to conceive with their own eggs, when given appropriate pre-cycle preparation and stimulation protocols.

Women with low AMH typically benefit the most from well-managed IVF protocols. Treatment plans for these patients at CHR most likely involve DHEA supplementation, which has been shown to be effective in improving IVF pregnancy rates when anti-Mullerian hormone is low.

How CHR Pioneered the Use of DHEA in IVF

We serve many patients from all over the world who seek out CHR’s expertise in treating women with low AMH. While, unfortunately, not everyone becomes pregnant with their own eggs, we are happy to say that our clinical pregnancy rates are quite respectable considering that most of CHR’s patients came to us after having multiple failed IVF cycles elsewhere or being rejected by another center because their chances of pregnancy were considered “too low.”

Contact us online to schedule an appointment or ask a question. Additionally, our Video Gallery features hundreds of videos on dozens of different infertility conditions and treatments.

"Anti-Mullerian hormone levels are a strong indicator of ovarian reserve. Even women with low (or undetectable) AMH may still have a good chance of pregnancy at CHR."

The probability of success with an in vitro fertilization (IVF) cycle largely depends on a woman's ovarian reserve and her ability to produce a large number of high-quality eggs in a cycle. Low AMH, as well as abnormally high FSH levels, suggests a compromised ability of the ovaries to produce a good number of high-quality eggs, denoting a relatively poor fertility prognosis and low probability of success with IVF. At CHR, our IVF success largely derives from 1) thoroughly individualized treatment plans, 2) pre-cycle supplementation to restore the ovarian environment, 3) aggressive stimulation protocols and 4) proactive management of (often interconnected) conditions that also affect fertility.

Very low anti-Mullerian hormone, usually defined as below 1.05 ng/mL, has been associated with extremely low pregnancy chances and many IVF centers flat out deny treatment to women with such low levels. However, recent CHR research published in the journal Human Reproduction suggests that even women with undetectably low levels of AMH (below 0.16 ng/mL) can still conceive and successfully carry pregnancies to term, if given proper treatment involving DHEA supplementation along with well-designed ovarian stimulation protocols.

Office Hours
Get in touch